Similarities Between The Electronic Nose and Human Odor Perception

Similarities Between The Electronic Nose and Human Odor Perception

Learn the similarities between the Electronic Nose and Human Nose 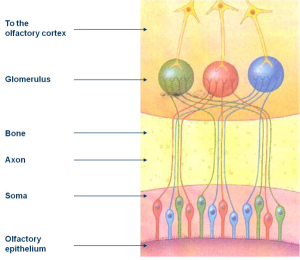 The olfactory epithelium: a network of sensors

Our biological odor sensors are not specific to single chemicals but are specialized for groups of chemical compounds. The cells therefore react strongly to the chemicals for which they are specialized but also to others chemicals, especially if present at high concentrations.

For example, let’s say we are exposed to an odor sample with hydrogen sulfide (H2S -> rotten egg odor) at very low concentration.  The blue cells respond strongly enough to generate a conscious detection of this odor when the H2S concentration exceeds 0.4 ppb (the H2S perception threshold).  A  higher concentration of H2S would also trigger the red cells, which are specialized for amines, to send a signal to the brain.

Typically, when perceived in ambient air (for example close to a composting site, sewage treatment plant or landfill site), a mixture of numerous odorous compounds are responsible for the recognized odor. The brain creates odor images composed by odor fingerprints which are specific to each grouping of odors. The odor fingerprint is the result of all the electric signals generated by the olfactory epithelium cells.

The electronic nose mimics the same process.  16 non specific gas sensors are exposed to a sample of air and, just like our own cells, are specialized for different families of chemical compounds.  After appropriate calibration, the e-nose quantifies (continuously) the odor concentration in o.u./m3 (odour unit per cubic meter). 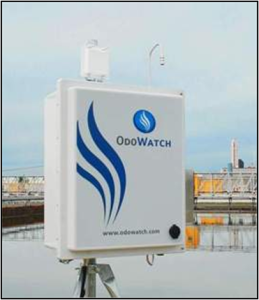 Example of an e-nose used to monitor WWTP odors.