We are honoured to present you a special blog edition written by our guest author Dr. Johannes Frasnelli.

Dr. Frasnelli specialises in odor perception. He conducts research in the field of neurophysiology of smell and taste as well as therapy in loss of the chemical senses.

This blog follows: On the way to understand how we perceive odors

For many years neuroscientists have worked in order to determine the basic dimension of odors, or, in other words, to find out in which basic categories we can divide odors into and how we can smell. Sometimes it is helpful to look around a bit, as the world sometimes provides us with wonderful ideas. We can look at perfumers, which are specialists from the point of view how we perceive odors. They use four basic categories for odors. They divide fragrances into the categories “woody”, “fresh”, “oriental”, and “floral”. While these categories may be very useful for perfumers, they are unsatisfactory for a neuroscientist, because there is no corresponding receptor or anatomical structure for these categories. For example, in taste, we can distinguish five (or maybe six) different basic taste qualities. They are sweet, sour, salty, bitter, and umami (and maybe fatty or metallic). These basic tastes however correspond to different receptors – located in the tongue’s mucosa. In the olfactory system, we know that there are hundreds of different receptors. We only know for few of them which odor perception they are responsible for – but there certainly does not appear to be a general distinction into “woody”, “fresh”, “oriental”, and “floral” receptors.

Therefore researchers instead of investigating the nose, started to look more closely at the brain, in order to maybe find anatomical features which may then be linked to odor perception. They indeed found brain regions that respond differently to odor aspects. In fact, they found several aspects of the odors brain regions respond particularly to.

The same was true for the alcohols: again, some smelled like lemon, some smelled like vegetables. By applying this trick, the researchers could look if there is any brain structure that responds specifically to differences in chemical structure (aldehyde or alcohol) or in odor quality (lemon and vegetable). They were able to find a brain region that specifically responded to chemical structure, and another one, just next to it, that responded specifically to odor quality.

Another group of researchers was able to determine that there is a brain region that specifically responds to different odor intensities. I have outlined before that odor intensity is also a basic odor category. The same group of researchers also found a brain region that responded to specifically to pleasantness of odors, which therefore may also be one basic odor category. Other categories have been put forward, although there is not yet a brain structure linked to it. For example, edibility of the odor appears to be a basic odor category. This means that an odor which stems from food is fundamentally different from an odor which comes from a non-food odor source.

We have not yet reached a final answer to the question of which is the most basic odor category. There are at least four basic odor categories, namely chemical structure, quality, intensity and odor pleasantness. So, we have some hints towards which direction researchers should look into. From the point of view of a neuroscientist there is not much support for the subdivision of odors into “woody”, “fresh”, “oriental”, and “floral” – other than that perfumers use it. 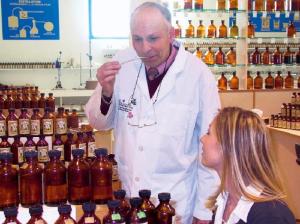 However, the very same perfumers are able to create wonderful scents, so maybe they are right, after all?

About the author: Dr. Frasnelli.

You are curious about the perception and measurement of odors. Discover how does an electronic nose work.