Why Do We Have 2 Nostrils?

Why Do We Have 2 Nostrils?

We are honoured to present you a special blog edition written by our guest author Dr. Johannes Frasnelli.

Dr. Frasnelli specialises in odor perception. He conducts research in the field of neurophysiology of smell and taste as well as therapy in loss of the chemical senses.

The advantage of having two eyes is obvious. Everyone covering an eye with a hand will realize how difficult it is to navigate with only one eye open. Two eyes allow us to see in 3D. With 3D (or stereoscopic vision) we can also perceive the depth of the image in front of us. The huge success of movies such as Avatar is due to the vividness of 3D images.

The same is true for ears. We have two ears in order to hear in stereo. We do not have to move our head to be able to localize the source of sound. If we sit in front of an orchestra, we can close our eyes and point very accurately where the trumpets are, and where the timbale is.

For both, ears and eyes, our brain takes advantage of the fact that it receives slightly different information from each ear (or eye). This slight difference allows the brain to calculate where the sound (or the image) came from. The best thing about this is that we do not even realize how the brain calculates; it comes all natural to localize a sound or an image.

After the examples from ears and eyes, one can speculate that, the two nostrils enable us to localize where a smell comes from. But before talking about us humans, let us first see, how the specialists do it. Let’s see how dogs track the scent of a prey.

You can look at it on the left hand of the image below. Here a dog is following the scent of a pheasant. You can see the pheasant’s track by the yellow line. A dog, which follows the track, does not follow this line closely. The dog’s path is highlighted in red. The dog rather crosses over the pheasant’s track, until he realizes to have lost it, then he returns until he finds it again. We are able to do the same: on the right side of the image you can see the results of an experiment in humans, performed at theUniversityofBerkeley. Here a chocolate track was put on a lawn, and subjects had to track it based on the smell only. You can see that the red line of the subject tracking the chocolate scent in yellow. In this experiment the researchers showed that we can track scents. Just as dogs do, we zigzag towards the source of the smell. 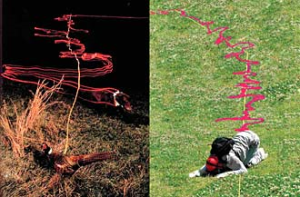 However, apparently, the sense of smell works differently than seeing or hearing. If we move towards a sound (or to something we see), we are not using a zigzag pattern. Instead we are very well able to move towards a sound (or to something we see) in a straight line. In fact in order to approach a source in a zigzag pattern, we do not need input from two nostrils; we could do that with one nostril alone, too. As long as we smell the odor we move on. As soon as we do not smell it anymore we move back. By doing so, we will approach the odor source.

So, this experiment showed that we humans are able to track scents; but to do so we do not need two nostrils. Therefore, the question remains: Why do we have 2 nostrils?

The answer may lie somewhere completely different. There is a so called nasal cycle: the mucosa of one of the nostrils is always a little bit more swollen than the other. What happens if the nasal mucosa is swollen? The blood vessels in the mucosa get larger, and more blood gets into the mucosa. The blood stays in the vessels, but the mucosa as a whole gets thicker, and thus there is less space for air in the nose. After two or three hours one the side changes and the mucosa of the other nostril is more swollen. This goes on and on, day and night.

Usually we do not realize if the mucosa is swollen, since the swelling is only slight. When we have a cold however, both nostrils are swollen anyways. Then the nasal cycle is more evident. We may lie in bed and try to sleep. We have difficulties breathing, because we have a cold, and the nose is blocked. Then we realize that – finally – the nostril which was giving us a hard time is opening up. In the same moment, the other nostril gets blocked. Voilà, this is the result of the nasal cycle together with the effect of a viral infection.

As we discussed, the nasal cycle is also present when we have no cold, we just have difficulties in perceiving it. But what is it good for? There is no definite answer to it, but the idea has been put forward that the nasal cycle is important for our immune system. The nose serves as an air filter so that all kinds of harmful substances (toxins, viruses, bacteria, etc) within the air we inhale do not get to more sensitive organs such as the throat or the lungs. So, the mucosa of the nose is exposed to all these dangerous things, and since they stay in the nose, the immune system has to handle them there.

The hypothesis of the nasal cycle goes therefore as follows: One side of the nose is maximally open, so that the body can breathe air. Toxic substances, viruses, bacteria, etc. are filtered and stay in the nasal mucosa. At the same time, blood vessels in the other nostril are open, so that immune cells in blood have maximal access. In a certain way, this nostril gets cleaned up while the other nostril is maximally at work. After a couple of hours, the side switches. Now the nostril that was at work before gets a clean up, while the other is back in business.

This gives us the answer why we have two nostrils. It is advantageous to have two nostrils, because it gives the body the possibility to simultaneously clean up the air filter of the nose, while one can still breathe with the other nostril.

About the author: Dr. Frasnelli.